Monday
9:00 AM - 3:00 PM
Tuesday
9:00 AM - 3:00 PM
Wednesday
9:00 AM - 3:00 PM
Thursday
9:00 AM - 3:00 PM
Friday
9:00 AM - 3:00 PM
Saturday
Closed
Sunday
Closed
LET'S. GET. BETTER.
Since 1984 the mission of Coerver Soccer has been to develop skilled, confident and creative players who can combine effectively or go it alone. You can read more about their methodology here.
The ultimate goal of the Coerver® Coaching Method is to:
Special Offer: Early bird registration ends on April 15th. Save 10% off a full day Coerver Soccer Camp at Spindler Park. Camp is 9am-3pm on July 5-9. The most competitive, challenging and fun camp of the summer - just ask anyone who has attended!
The camp will improve your club player's decision making by focusing on: Ball Mastery, Receiving and Passing, 1v1 Moves Attack and Defense, Speed, Finishing and Group Play.
Don't forget everyone's favorite: WORLD CUP!
Each player will get a jersey and the chance to win awards.
Get the Coerver Experience in the 17th year of camp in Columbus, O-H-I-O! 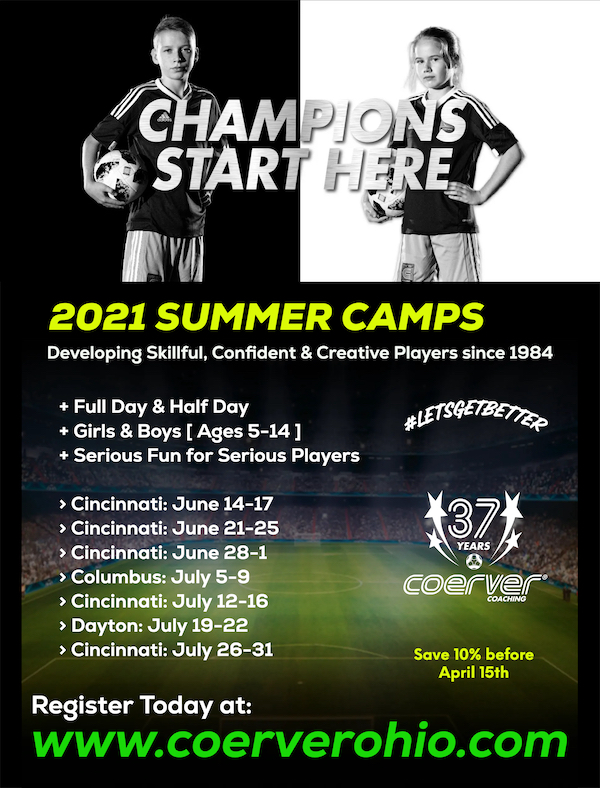 Pricing: $268 for early bird camp tuition; $297.50 for standard tuition, after April 15.
Sibling Discounts: 10% after April 15
Teams/Groups of 8 players: 10% after April 15
Coerver Coaching is widely considered the world's #1 soccer skills teaching method as it has revolutionized the way soccer is taught while earning the respect of global soccer clubs, top federations and endorsed by professional coaches and players.
CHAMPIONS START HERE!

Central Ohio Elite (COE) is a Select/Travel Soccer Club that fields teams for all talent l...

Greater Columbus Tennis Association (GCTA) is an official member of the United States Tennis As...

Register today for Nike Junior Golf Camps and get better this summer!Improve your game with some ...

Campers at every Nike Basketball Camp will develop all of their basketball skills – shooting, pas...

PRO Martial Arts is about far more than kicking, punching and karate workouts. From kids to adult...